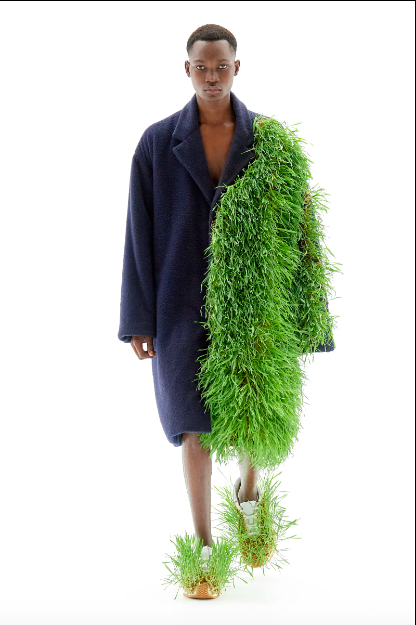 To quote our experts, “ Nature and its symbolism represent a spiritual hope driver for a new potential and regeneration”. While this is true, in our heavily digital world, nature is now fused with technology in our search for salvation and if one designer of the latest Menswear Fashion Week understood that, it’s Jonathan Anderson for Loewe.

In an effort to create “a fusion of the organic and the fabricated” , Anderson toyed with tech and the ultra white set to make this physical show appear to be a non-realistic, computer build experience as to build a 4k experience.

Nature is presented through screens in every aspect in said experience ! It’s physiologic with people kissing & winking eyes and animal with flocks of birds at sunset, tropical fishes & flowers.

Anderson insists on the fact that those screens are not a criticism as he states : “When you're sitting on a train or in a cafe, everyone is looking at the screen, and in weird way, I was fascinated by this idea. What happens when a screen becomes the face?”. He sees the merging of technology and fashion as an opportunity not just for the planet but for man kind as it seems to encourage us to look closer, to study oneself as an organic being.

That being said, Anderson still wanted an organic dimension to the collection, and that’s where the brilliant Paula Ulargui Escalona comes in !

Escanola is the horticoutirist responsible for the literally living breathing garments that walk the show, and while they’ll never make it to the store (who on earth wants to have to water their coat or hoodie for the rest of times ?!) they will never leave your brain and probably haven’t left your newsfeed yet either !

While everyone’s running to the digital, she choses to encourage people to reconnect with nature based on her own experienced of weaving hemp in Asia. Having spent her entire school years in alternative education spending time in a Waldorf School and a hippy boarding school in the UK, it is no surprise that she could deliver mossy knolls pollinated tracksuits, hoodies and sneakers that looked as though they had been yanked straight from the earth ; as well as half-and-half coats had been seeded with shaggy saplings, and blades of grass burgeoned across denim !

The whole thing seemed to recall the experience of growing watercress in a classroom (we know your mind immediately went there, don’t deny it) only the pieces were actually cultivated over 20 days in a polytunnel on the outskirts of Paris.

As we watch screens and digital worlds take over the world, the choice to include nature in there before we lose it for good feels not just justified but necessary and Anderson definitely delivered !